We start out the day at Momi and Toni’s for some breakfast crepes. After enjoying a light breakfast we head over to the Imperial Palace. The Imperial palace houses the emperor of Japan and has several large gardens surrounding it. Although only part of the actual castle remains, the Edo Castle, the palace gardens are quite expansive. While strolling the palace’s gardens, we stumbled across a summer concert series featuring a full Japanese Orchestra/band. We sit under the shade of a nearby tree and enjoy the music. 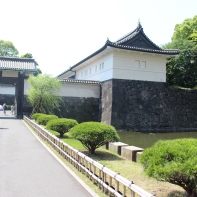 After strolling through the gardens and taking pictures of the castle, we make our way over to Hamarikyu gardens. Here we enjoy a nice stroll through the gardens. We come across a preserved 300 year old pine. We stop for a cherry blossom ice cream puff and sit on a nearby bench. We witness a Japanese couples’ wedding photoshoot. As we stroll down the garden we arrive at the Nakajima no Ochaya tea house and enjoy a cup of piping hot Macha with Wagashi (translates to Japanese sweets – in this case sweet yam dumpling). The tea house is overlooking a pond and we peacefully drink our Macha and enjoy the nice breeze. 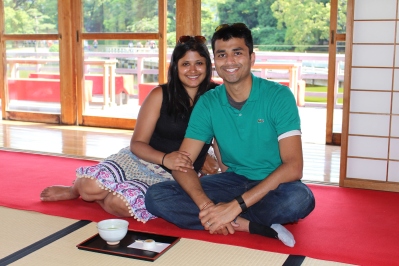 After all the walking, we have worked up an appetite. We choose T’s Tan Tan in the Tokyo Station which we hear about from our friend Chirag (thanks Chiru!!) and has also been suggested online to offer tasty vegan ramen. The entire menu features several varieties of all vegan ramen. Going from struggling to find vegetarian food to having an abundance of choices made our decision tough. The ramen was amazing, and we both choose sobu noodles this time which we both realize we prefer over the thicker udon noodles. We both add a lot of hot sauce to our ramen which led me to say “if its not red its not fun” which Sanchit thought was quite amusing. 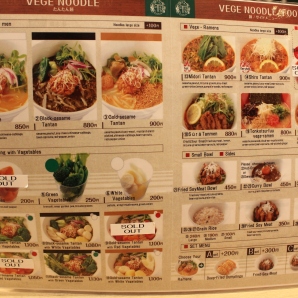 After thoroughly enjoying our lunch, we attempt to book our next days travel for Hakone since we are at the Shibuya station. We decide to buy our ticket the following day leaving us with more flexible travel plans. We head over to our hotel to freshen up. After resting for a bit, we find a nearby Sake market in Shinjuku called Kurand Sake Market.

The Kurand Sake market is actually a chain with several locations, but they offer all you can drink sake tasting for 3000 yen. I had seen this on Trip advisor and both of us wanted to try sake. The Atmosphere in the market quickly picks up and most tables are filled with young college aged people. The market allows you to bring food thus we notice many people bring their dinner while enjoying all you can drink Sake. As tempting as it was to continue drinking, after trying several types of Sake, we make our way around the Shinjuku area looking for Sushi.

We pick sushi as we have mainly been eating Ramen for most of our meals and are looking for a change. We pick a restaurant called Zanmai as they offered veggie sushi as well. Sanchit was able to try octopus, tuna, and salmon while I opted for some pickled veggie sushi. The sushi was good but we weren’t too impressed. We realize that this is likely due to the Caliber of the restaurant as later on the trip we do see some better looking sushi places. Also we realize that sushi isn’t actually that big in Tokyo and many people eat Ramen or sashimi, or probably the freshest catch from the fish market. 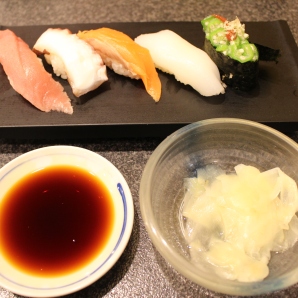 We walk back to the hotel, pack and get ready for bed as we have plans to see the Tsukiji fish market in the morning and hop on a train to Hakone after that.