Escaping the hustle and bustle of Tokyo

We set out early to see the famed Tsukiji fish market. Being vegetarian, I had my apprehensions about visiting an all fish market. We were told by friends who had visited Tokyo that this was an attraction worth going to. We had originally planned to attend the tuna auction however we learned that we had inadequate planning. In order to go to the auction, you must find a hotel close to the fish market as public transportation doesn’t operate during those hours and cab/ubers are costly in Tokyo. Nevertheless we were in Tokyo so we at least wanted to see what the hype was about. We arrived bright and early around 7am to the fish market only to find out it was only open to private buyers until 10am. We decide to use this time to find some breakfast in this cute mom and pop shop with literally 5 seats. After filling up on some breakfast sandwiches, we stroll around some of the shops on the outskirts of the market and pick up some matcha. 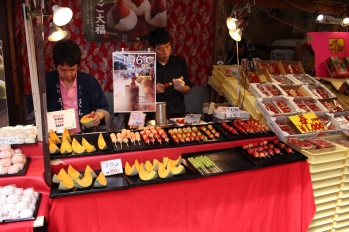 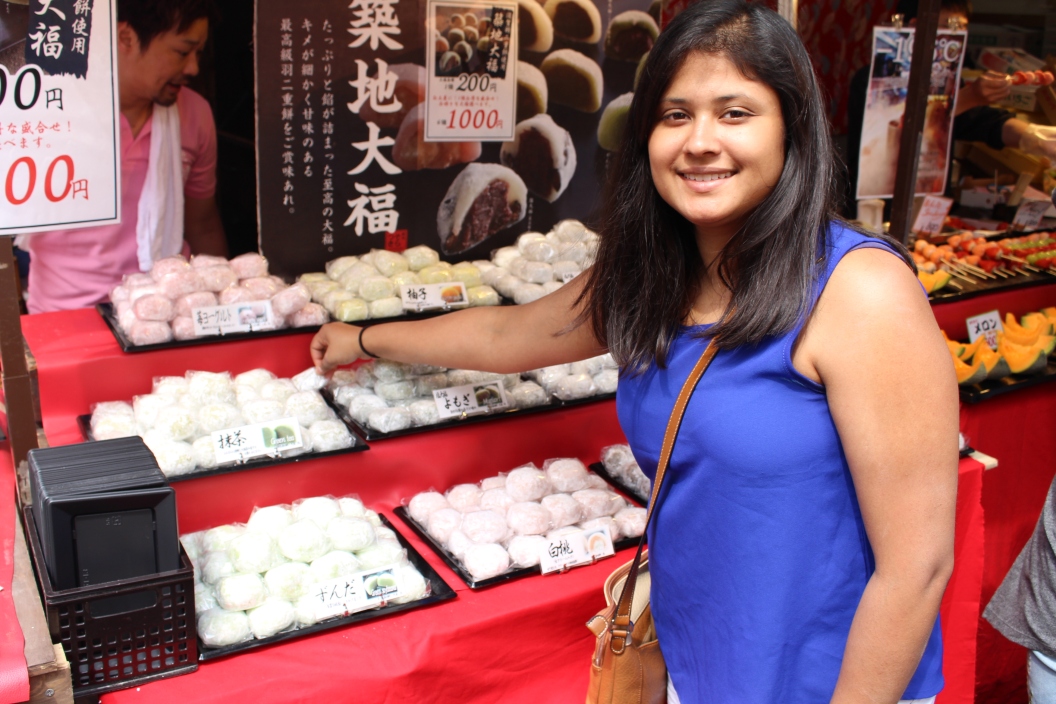 We also try some Daifuku, a glutinous rice cake stuffed with sweet filling, most commonly anko, sweetened red bean paste made from azuki beans. As we had some time to kill, we find the Tsukiji Hongwanji Buddhist temple nearby and pop inside to explore. After sitting for a bit, we head back over to the Tsukiji fish market that is now open to the public. As we arrive, we realize many of the vendors are already packing up, clearly these people start and end early. Many of the vendors still have some fish available and it was truly a sight to see. We see beautifully colored octopus, eels (live and dead), small and large fish, sea urchins. We even catch one of the vendors cutting up a large tuna. Walking through the market, its easy to see the fascination and I can only imagine what it is like in its true glory. 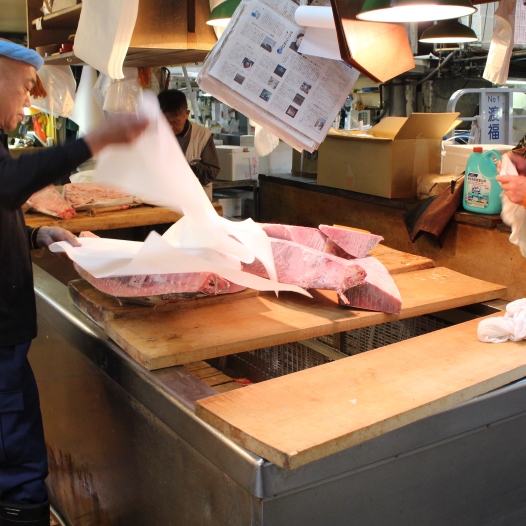 We explore the fish market for a bit more and head back to Shinjuku station to pack up our things. After checking out of our hotel, we walk over to the main Shinjuku station stopping first at the Shinjuku Toho building where a large Godzilla figure pops out between 12 PM – 8 PM at the top of the hour. I had been planning this as something to see however was never able to fit it in. By chance we happen to be walking through Shinjuku at the right time and place. We reach the Shinjuku station and have a couple minutes for a quick bowl of ramen. We order through the vending machine and join the locals in quickly slurping down our ramen before catching our train to Hakone. I am pretty sure Sanchit had a plate of fried pork (he had tried to order chicken) along with his ramen. He claims it was one of the best meals he had in Japan and the meat simply melted in your mouth.

Godzilla at the Tokyo Toho Building

As usual we are running late and barely make it to the Odakyu station where we quickly grab tickets on the Romance car to Hakone, a serene little town about 100 kilometers outside of Tokyo. The journey is short (about an hour and a half) but the ride is beautiful as we zoom past the country side. We are told that we may be able to catch a glimpse of the elusive mount Fuji however we aren’t lucky to see it. I guess we have an excuse to come back to Japan. After a short journey, we arrive in Hakone and decide to obtain a Hakone free pass to maximize our time in Hakone. The Hakone free pass is a great deal and covers all local buses, trains, cable cars, ropeways, and the cruise. The pass even includes the train ride to the Odawara station, which is where you can hop onto the Shinkansen bullet train to travel to Kyoto and other parts of Japan. Note: There is no Shinkansen bullet train service from Hakone. 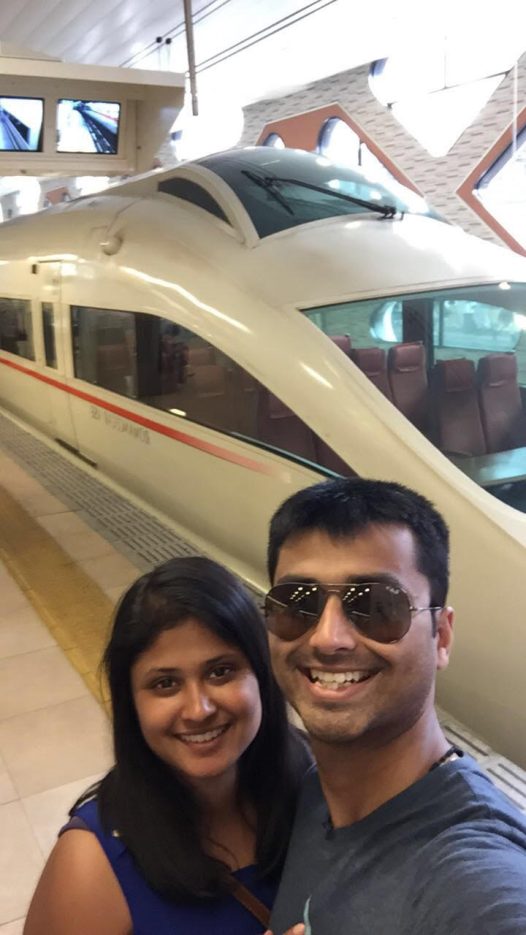 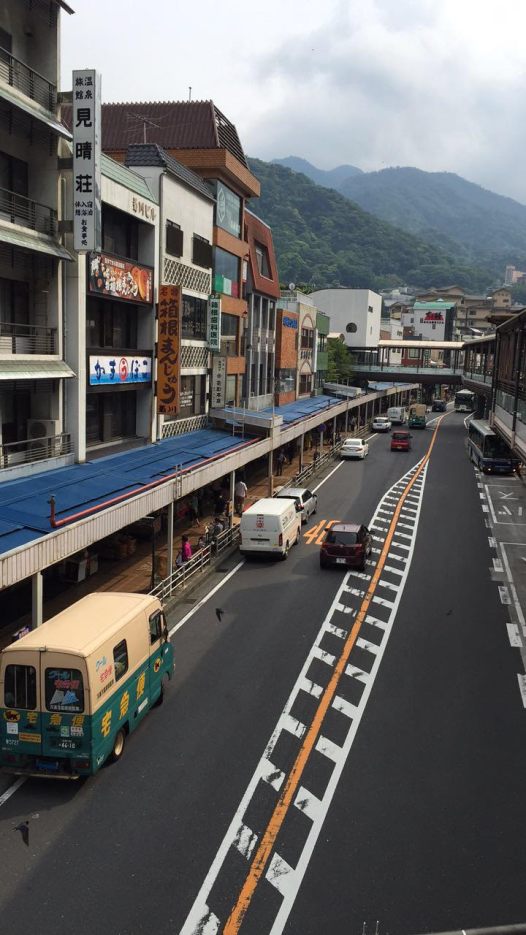 View from the Hakone train station

We catch a bus to our Ryokan, Yojokan Haru No Hikari and are greeted by a quaint but beautiful lodge. The hotel concierge gives us a tour of the Ryokan and shows us the 2 different onsens and the restaurant. Dinners are typically included in the Ryokans for a fee and are highly recommended if you are looking for the traditional Japanese experience. We get changed into our traditional Japanese garb called the Yukata and head down for the dinner. The ryokan we chose caters to vegan and vegetarians (highly recommend the Ryokan btw, especially if you are a vegetarian). The dinner was an amazing experience with a full 7 course meal served with warm sesame tea. Suddenly, we wished we had stayed in Hakone for 2 nights to enjoy the dinner again. 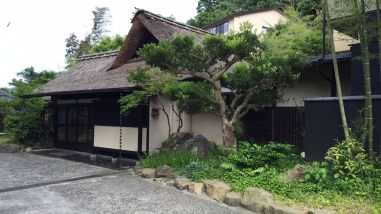 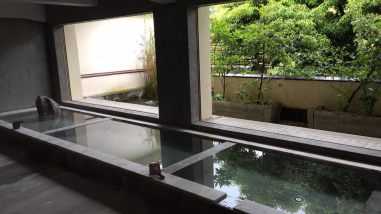 Onsen at the Ryokan 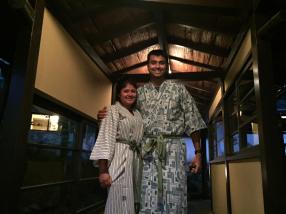 Dressed in our Yukatas for the dinner

Lavish dinner at the Ryokan

Dinner at the Ryokan

Since the dinner is early in the night, we head over to the onsen after dinner to wash away the day’s fatigue and relax in the hot spring water. Next, we walk outside in the beautiful weather and stop at a small local convenience store to pick up some local snacks and sake for the night. We call it a night after enjoying some sake.